Kevin Rowlette received a phone call from a Police officer in Cane Garden Bay, British Virgin Islands reporting that a charter yacht was hard aground in Cane Garden Bay. Husky Chase and crew departed Nanny Cay Marina for Cane Garden Bay. Husky Salvage and Towing arrived at the scene and found the charter yacht ‘Mercury’ with her stern elevated on the shoreline pointing in a Southerly direction. The mooring was still attached to the vessel and the charterers where on deck. A tow rope and bridle where attached to the bow of ‘Mercury’. Husky Chase pulled the vessel until she was clear of the shoreline. ‘Mercury’ was towed to the fuel dock and secured for the evening, after confirming that her bilges where dry and she was not in danger of sinking. 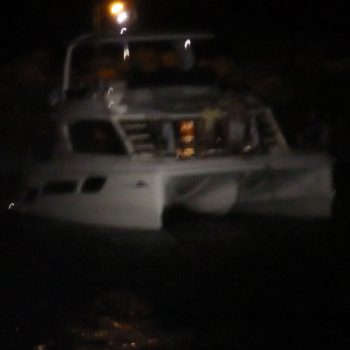